We celebrated Welsh Music Day on Thursday 6th of February. We wanted to find out more about Tom Jones so spend the day learning about some of his songs. We then had an assembly and sang lots of Welsh songs. We tweeted Tom Jones to show him our work! 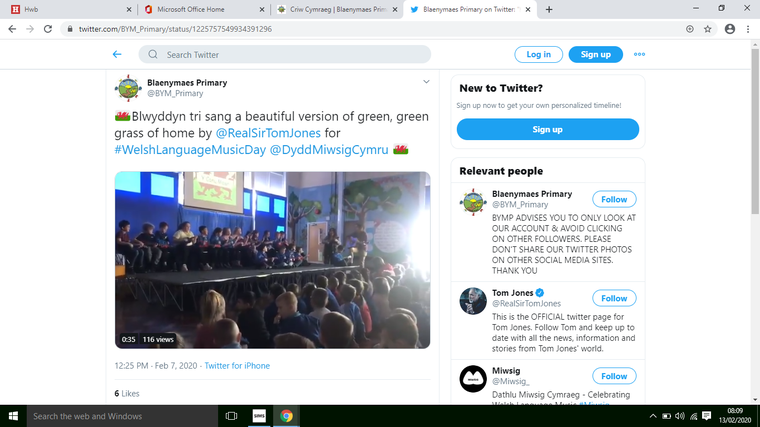 The Criw Cymraeg undertook a learning walk through the school to see if we could improve the amount of Welsh on display. We were pleased to see that there was lots of Welsh throughout the school.

We did notice that there wasn't a great deal of Welsh near the fruit trolley. So we decided to make posters and phrases to put there so we can ask for fruit in Welsh!

We had a school wide contest to design the best graffiti art. The winners are on display around the school!

The Criw Cymraeg decided they wanted an area to promote Welsh games and the language on the school yard. We asked Mr Dennis if we could build a stage to encourage the children to join in with our games on the yard. He said yes!

Hello everyone! The Criw Cymraeg have been busy and so have welsh club. The criw sent out a letter to ask everyone to promote 'Shwmae Day' this week and the children and teachers responded well by wearing welsh colours and taking part in lots of activities. During a welsh assembly today, Mrs Jones and Mr Carpenter found out that blwyddyn 6 wrote welsh poems on their i pads using lliwiau-welsh colours. Blwyddyn 5  used 'Bore da ' magazine and worked in pairs to talk about themselves on their i pads.The younger juniors went on a trail to find Rhodri using welsh directional language! Wow! Bendigedig! Blwyddyn 3 spent the day in the Liberty Stadium and spoke some welsh to the gentleman who was showing us around!

Welsh club have been busy making 'siarad cymraeg' posters to display around the school. They have tasted welsh cheese and welsh cakes. They have learnt a new welsh game and they  have tried a quiz about their knowledge of Wales. Come and join welsh club . We meet on a Wednesday in Mrs Jones' class and club finishes at pedwar o'r gloch-4pm. Hwyl fawr!